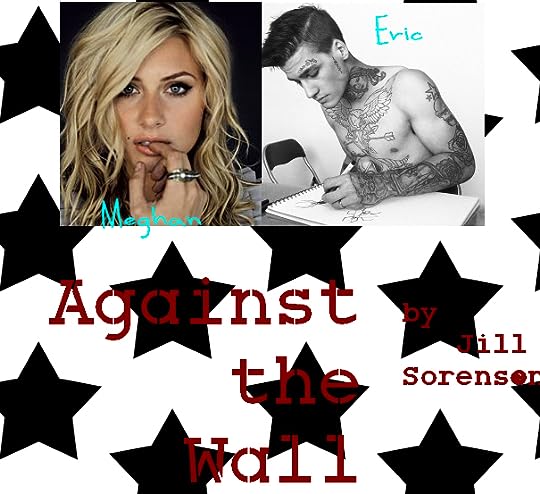 I had no idea Against the Wall was a second book in a series until I started reading it. It doesn't impact anything, though. This story, as well as the first, is a standalone with an HEA. I enjoyed this new-to-me author's writing. I laughed at the characters a couple of times, felt sorry for them in other situations, and held out hope that Eric would go straight.

Three years ago, Eric Hernandez went to prison for manslaughter. Because he didn't want his then girlfriend, Meghan, to sit around and wait on him, he pushed her away. He told her he didn't want her anymore, even though she was all he thought about during his prison stint. He survived inside those walls by drawing sketches and tattooing. Not to mention his best friend Junior with ties to the Mexican Mafia. When Eric is released he goes to stay with his ex-sister-in-law and her new cop husband, Noah, who is Meghan's brother. Noah helps him get his foot in the door of a tattoo parlor where he becomes a somewhat jack-of-all-trades to prove himself worthy of the job.

Meghan has moved on from Eric. Her new boyfriend, Chip, is the rich, athletic type. However, his growing aggression is coming between them. A gap that is made even wider with the return of Eric, the first guy she ever loved and who still holds her heart. He may be a criminal, but she knows he is a good person. Besides April, she's the only on who can see past the dangerous persona he tries to embody.

There are some issues this book deals with that are hard to ignore. However, I liked the protectiveness of not only Noah, but Eric as well when it came to Meghan. Their romance gets a second chance although Eric is still trying to protect Meghan from him, for her own good. I was amazed at how strong a friendship Junior and Eric have. The sacrifice he makes for Eric at the end took courage and heart, even though he's a gang banger and drug dealer. You know what they say, the devil protects his own.

This is not the darkest romance I've read. If overcoming a rough past and trying to improve your future is something you like to read about, then I think you should take a chance on this book.

~ARC provided through Netgalley in exchange for an honest review~
Releases 2.2.16


View all my reviews