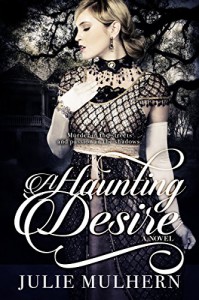 If you have read my reviews before, then you know that New Orleans is one of my favorite settings for a book. That wins brownie points with me straight from the start. Added to the mix is: a mystery, some Voodoo, and a little romance.

A Haunting Desire is a ripper-esque tale. Except it takes place in New Orleans instead of London, and the victims are men who buy the company of women in the Red Light District. Trula is a madam who has sworn off men after her grandmother sold her to a sixty-five-year-old “protector” when she was fifteen. However, Zeke, the government official sent to solve the murders, is determined to break down the walls Trula has put around herself.

I really enjoyed the writing style, it was wonderfully descriptive. The pace was steady throughout the book. I had to put it down quite a few times because real life kept interrupting, but I didn't have any trouble getting into it again.

The story has a little dash of the paranormal with all the ghosts hovering around. Baron Samedi, Papa Legba, and Marinette also make an appearance. Even with all this going on, I still felt as if something was missing. Maybe I needed more background on the main characters, I'm not sure. However, it was still a good read and anyone who reads historical or paranormal romance will like this book.