Sisters of the Craft Book 2 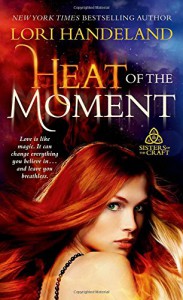 *ARC provided through NetGalley in exchange for an honest review**

Heat of the Moment is the second book in the Sisters of the Craft series. I assumed I was going to like this book better than the first one, but that wasn't the case. It was still a pretty good read, though.

We meet the second sister, Becca, in this story. Ever since she was a child, she could hear the thoughts of animals, but hid her talent as she got older because she didn't want anyone thinking she was crazy. Throughout most of the book, she says she can hear the animals, but then she turns around and says it's just all in her mind (like she's only answering herself). Which was a bit annoying.

Then, she runs into Owen, a guy she was in love with ten years earlier before he left to join the military. With all the weird stuff going on in Three Harbors, (animal sacrifices, talk of witches) Becca finds comfort in Owen's arms again, but the witch hunters are back and Becca has become their next target.

There for a minute I thought this book was just going to be a repeat of the first one. They both held my interest better around the middle of the book and the big sacrifice scenes seemed to be almost the same, but then it took a different turn and the ending was great! I wasn't too surprised by the identity of the two witch hunters at the end, but it was a fine twist to the story. It is possible to read this as a standalone, however, I would suggest reading In the Air Tonight first. Still, I would recommend this series to fans of Charmed. There's even a wolf named Pru.