Roaring for HIm by Celia Kyle 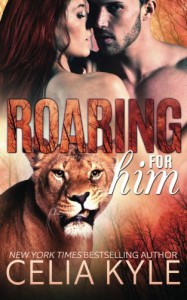 A lion, a tiger, and a bear...sounds like the beginning of a Wizard of Oz joke doesn't it? Well, in actuality, it's Celia Kyle's new book, Roaring for Him. A fun shifter romance!

Tilly (the lion) has to call her client and ask if she could deliver the cookies they ordered at a later time because her sister, Phoebe (the bear), decided to add her own touch to them and now Tilly has to correct the problem. When she dials the number, the voice on the other end is so drop dead sexy that she can't speak. Not only that, but she feels a major connection to whoever this man is, but she claims to have the wrong number and hangs up. A few minutes later, the owner of that voice comes to the shop and overhears Tilly having a conversation, with her BFF, that wasn't embarrassing until he showed up.

Mitchell, the Alpha of the Wilder pack, is starting to believe that Tilly is his mate. She is all he thinks about and when one of his pack members approaches her in a threatening way when she arrives at the pack house to deliver the cookies, he forces him to back off. No one will threaten Tilly if he can help it. As they start to spend more time together, a couple of members of his pack get upset because they believe that cats and dogs don't mix. But that's not all Tilly has to worry about, and Mitchell plans to be by her side every step of the way.

These characters are so sassy! They all like to joke around but they mean business when it comes to protecting their family. There were captivating moments, like when Tilly and Mitchell talked about their pasts, and there were those laid-back moments as well. I haven't read a shifter romance in a while, so I'm glad I had the opportunity to read this one! Recommended!

Thanks to Celia Kyle for providing me with this ARC!