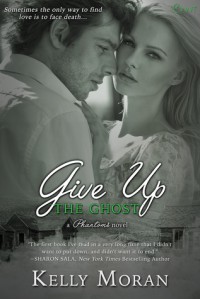 
Such an enticing blend of mystery, romance, and paranormal investigating! Give up the Ghost is the second book in the Phantoms series, but can be read as a standalone.

Six years. That's how long Paul and Kerry have been working together on the paranormal TV show, Phantoms. It's also how long Paul has been in love with Kerry, without her knowledge. Kerry is somewhat of an empath, sensing people's feelings both alive and dead, which is why Paul has kept his feelings for her hid away. Their contract states 'no dating within the crew', and Paul knows how important the show is to her.

The night before their meeting to find out where they will be investigating next, Kerry looks out her apartment window and sees...herself, dressed in the same pajamas, and staring at her with a blank expression. She immediately calls Paul, hysterical. He's her best friend and the one person she depends on. Paul uses his key to enter Kerry's apartment, and finds her sitting on the floor. What she's saying doesn't make any sense to him and he tries to calm her down so she can explain, again, what she saw. However, Paul doesn't know what to make of it. Knowing she's safe, he returns home so they can both get some sleep.

At the meeting, they are introduced to the newest member of their team, Cain. They also find out they are going to be investigating a ghost town in Black Canyon, Arizona. Before boarding the flight, Cain overhears Kerry and Paul talking about what she saw the previous night. He does some research, and by the time they get to their hotel room in Arizona, has an answer for her. A doppleganger, which is usually a harbinger of death. Whether a warning for herself or someone close to her, they don't know, but Paul is determined to keep her safe.

During their time in Arizona, they experience more than one hospital visit, threats from invisible forces, and confessions.

I knew the moment I started reading the 'terms' section at the beginning of this book, that I was going to love it. I knew all of the terms and devices mentioned in that section. Anyone who knows me, or has read some of my reviews before, knows that I am a paranormal junkie. This is such a good idea, a ghost-hunting romance? I'll be the first to volunteer for that read! Not to mention a friend-to-lovers romance...with a guy who smells like books, I might add.

One of my favorite parts was the Mary Mackaby mystery. The interaction between the supernatural and the ghost hunters was fascinating! The author had perfect timing when it came to those "didn't see that coming" moments. If you like the paranormal, romance, or paranormal romance--this book's for you!