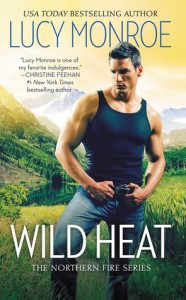 When Taqukaq (Tack) MacKinnon discovers his childhood friend Caitlin (Kitty) Grant is moving back home, he is determined to keep any old feelings locked up. He tried that once, eight years ago, and she had married another man. Kitty's great aunt Elspeth informs Tack of Kitty's divorce. Tell him about the suspected abuse that coincided with her being in the hospital, weighing in at a mere ninety-three pounds. Tack wants nothing more, at that moment, than to get his hands on Kitty's ex-husband, Nevin.

When Tack is invited over to the Knit & Pearl (the B&B ran by Kitty's Gran and her two great aunts) for dinner, he hears the unmistakable ring of Kitty's voice. He braces himself to see an anorexic Kitty. However, she looks better than he imagined, a little too slim but apparently she's trying to get back on track.

Realizing that she needs friend, Tack decides to take her on a hike. They end up sharing a kiss and a little more. Tack, thinking it was a mistake, tells her that it can't happen again. But when he see's her slipping back into her anorexic ways, he offers her a deal she can't refuse.

I think I would have rather enjoyed reading about Tack putting the smackdown on Nevin. Even though Kitty handled herself pretty well, where he was concerned.

Watching her fight against her illness to return to the girl she was before Nevin came into her life, was uplifting. I enjoyed the relationship between Tack and Kitty. It bloomed like the pictures of the flowers she took for her framed paper bouquet.

You will find a beautiful message of family and love in this story. Along with a woman rebuilding her life and realizing she wants to rekindle and old spark.