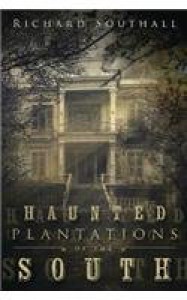 This book combines two of my interests, history and the paranormal. Most of the hauntings are of Civil War soldiers, which is where a lot of the history comes into to play. Some of the original plantation owners either played a significant part during the Civil War era (held an office or signed the Declaration of Independence), or were married to women who were related to someone who did.

There was quite a bit of research conducted to make this book. The author even explains the different architectural styles and the difference between antebellum and postbellum plantations. He also has them categorized into seven different states; Alabama, Georgia, Louisiana, Mississippi, North Carolina, South Carolina, and Virginia.

I liked being informed of the plantations that were used in film and TV. In the back of the book, there are tons of references with websites for you to check out. Also, a few books were mentioned as well.

One thing that was missing: visual aids. If there had been pictures of the plantations, and especially the ghost pictures that were brought up in a few of the stories, it would have made the book better. But, it's still not a bad read. I enjoyed the folklore and learning a few new things about the Civil War.