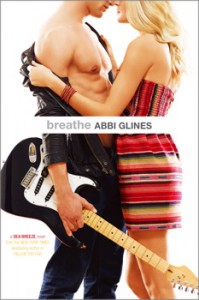 Sadie has spent most of her teenage life being the responsible one in her family, which consists of just her and her mother, who is now pregnant and close to having the baby. More than ever, Sadie has to take care of her mother who she refers to as Jessica. When Jessica decides that she can no longer work, she tells Sadie to go in her place so they will have money to pay the bills. Sadie, miraculously, gets hired.

Jax Stone, the famous teenage rock star, is heading to his home in Sea Breeze, Alabama, for the summer. He goes there to take a break from the all the craziness of his life. No one knows he's there and that's the way he likes it. So when he sees a pretty blonde girl wiping something up that was spilled on the floor in front of his bedroom, he thinks she somehow weaseled her way onto the staff just to get close to him. Little does he know...she's too concerned with making sure she has food on the table to worry about his stardom.

Ok, lets go ahead and state the obvious: This book has a lot of similarities to Fallen Too Far. I just saw a review where someone was talking about another new adult author whose blurbs were pretty much the same for two of their books. (And they were pretty mean about it). I don't have a problem with that, as long as it's not the same story with different character names. There is not a book out there that doesn't have something similar to another book.

Now, I have to say that I like Fallen Too Far better than Breathe. I'm sorry Jax, but Rush stole my heart. It may be just that I read Rush's story first...who knows? I have always been drawn to the bad boys and it seems to me that Jax was good from the start, and there's nothing wrong with that. Even when he tries to be bad (like when him and Marcus are around Sadie at the same time), he's not Rush Finlay bad.

I still liked the story, though. Jax, to me, seemed to be mature for his age just like Sadie. Maybe the life he is living forced him to grow up too. I always like when someone straightens up and realizes that they can't live without the person they try to stay away from. Even when they are trying to stay away to protect the other person.

Recommended to fans of New Adult and Abbi Glines.