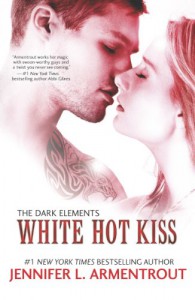 I lost myself the moment I found you.

If you get to the part, in this book, where that quote is found and your head's not swirling with emotion? Then you're not human. That, or you're just not that into YA fiction or the paranormal.

It took a little while for me to really start feeling this book. Which is weird because, usually, anything that Jennifer L. Armentrout writes has me hooked within the first two chapters, three at the most. But....holy bat brains, batman! From somewhere around the time that Layla find out who her mom is, until the very last word on the last page, I could not stop reading!

Of course, any book that starts out with:

There was a demon in McDonald's. And it had a powerful hunger for Big Macs.

....is probably going to be good. And this one exceeded my expectations.

Don't think that I didn't notice those little instances that paid homage to Supernatural, either. The 1969 Chevy Impala? (except Dean Winchester's is a 1967 Chevy Impala) The demon leaving a possessed body the same way? (except the smoke was red instead of black) Roth's favorite song being Paradise City? (everyone knows Dean loves the older music) Oh yeah, I noticed. Supernatural is even mentioned in the book. So thank you for that Mrs. Armentrout. I love that show and I love your book!

Now, as for the love triangle...at first, I didn't know if I liked Roth or Zayne better, but by the end, I was Team Roth all the way. What he did for Layla (well, the entire universe, actually) was something that any card-carrying demon would never do. If any of the Wardens wanted him dead after that selfless act, then...they should have their wings pulled off. (Ooh, was that too harsh? Good thing we are talking about fictional characters) :)

Recommended to: fans of Jennifer L. Armentrout, fans of YA fiction, fans of the paranormal, fans of Supernatural, or just everyone!