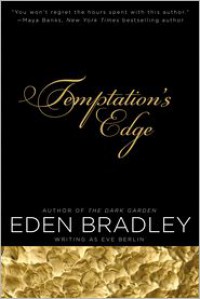 Temptation's Edge started out really well, and the last few chapters were good too. I had trouble trying to keep my concentration on the story, between those two parts. I know the cause of it, though, and I will explain shortly.

I had no idea that this book was part of a series when I started reading it. It wasn't until Mischa was having dinner with two other couples (and a single Irishman) that I realized this was the third book. However, you can read this story as a standalone. Otherwise, I would have stopped reading it until I read the others first. It just irks me to read a series out of order that had a cliffhanger ending or unanswered questions from previous books.

I liked that Mischa and Connor were both headstrong characters. (Of course, he's a dominant. With an Irish accent, I might add. Even though that has nothing to do with anything I just said.) Their whole 'I-can't-let-you-hurt-me-so-I-will-deny-my-feelings' thing was starting to grate on my nerves, which is weird because I, normally, like the angst. Maybe it just went on too long.