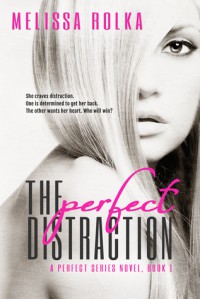 Kate needs to be distracted from thoughts of her ex-boyfriend Kyle who wants her back after breaking up with her because he wanted to be single when he started college. She finds that distraction in the form of a few guys at her college, one in particular named Reed (with the ocean blue eyes). It doesn't prove to be enough at first and she gives in to Kyle.

I don't like to say bad things about books because I know how much work the authors put into them. But, at the same time, if I were an author, I would want people to be honest. So I have to say that there were times when I felt like there were a lot of useless words. For example, there was a sentence something to the effect of: Slowly, Reed kissed a slow trail.... That wasn't the exact phrase but you get my point. It was a bit distracting for me. However, the plot of the story was good and the cliff hanger ending makes me curious to learn more about the characters and how they will handle what's on their plates. Which is why I gave it three stars. There are a whole bunch of five star ratings, though. So if your interested in it at all, I say give it a try!